Today I wake up early even though it was late yesterday – I promise myself to properly sleep for the first time in a week in Monte Carlo. A friend of mine lives there with her boyfriend and I ve been planning to visit them for a long time. Unfortunately they went to make honeymoon surprisingly. Ursi was very kind to leave their key for me at a neighbor so I am now in their apartment only 4 minutes walk from the place Ayrton Senna died so dramatically… Well, but how did I get here?

Weather is bad today and there is snowing heavily. I try to find somebody who can help me with the computer problems because it will be easier to solve with german speaking people. All the small companies who offer help are closed on Sunday and the only guy I reach sound so ill on the phone that I feel bad for even calling him… With very little hope I call Ditech, a company who sells cheap and good quality hardware mostly by internet. They have a retail shop in Innsbruck and as I explain my problem and what I am doing they tell me to come.

Quickly I pack my stuff, give a hug and say good bye to Noemi, her flat mate Ilka who is busy moving out and the other guys who help her and bring my stuff down. Fortunately snow had stopped falling so I clean it of my bike, fix my luggage and go. At Ditech they test the wifi which is actually working…. Awesome! For the big SD cards they try several cardreaders and finally find one that works! 5 euro and all problems are done. The day before a guy at Hartlauer, who should have good service at the shops sold me a cardreader for 15 euro that does not work… Never mind, all is well and I leave Innsbruck heading south well before lunchtime!

On Brenner Pass I see the sun several times and when I ride down to Italy (nice gopro movie btw) the surrounding turns from white to green again. I am freezing again as the view makes me feel like it should be warmer. It’s around 700km for today so I have to keep going! Stopping only when I need petrol having quick cappuccinos then my ass and my hands start hurting. The grips are really hot (they are heated) but it is comfortable because otherwise I would probably freeze.

After the first stop it starts raining again until sunset. Fortunately it stops when I make the second petrol stop because at this time all turns white again. A little after dark the flat turns into mountains again as I approach the sea. Riding down the hills near Terrarossa it becomes warmer but a very strong and sudden wind makes riding dangerous! At the last petrol stop I change the sd card of the gps to get the French map and find out it does not find the address ursi gave to me. No problem, it’s around 7 pm and I will find it before it is too late – only 50km to go to Monte Carlo and I can’t wait to get a real hot shower there! The view at San Remo at night from above is amazing and soon I arrive in Monaco.

The first people I ask for the way, speak French only so I hand them the cell phone with the message in which I got it. The first guy is very friendly and sends me the right way, second one is tourist in a very fancy car and sends me to a local on the next corner. The guy is a little drunk, takes my phone, deletes the message and tells me he only speaks French…. Fuck you, that was my only note of the address! I exhale and decide to stay calm. I said the name of the street a few times already so I just have to keep repeating – first find the street then we will see. 1 minute later I am there. It’s a very small boulevard, Ursi first said she will leave the key at a pharmacy, which I am glad she did not because it is Saturday night now! Ursi said there is a motorbike park just in front of the house and I remember the first name of Ursis neighbor….  That should do it. I find a motorbike park right next to a pharmacy and stop the bike. I go to the door in between and read the doorbells… HARIOM! First I see the name of my friend and then, not the first name of her neighbor but I immediately recognize her family name. It’s an old, French speaking lady and she is a little confused because I am so late – she expected me days ago!

YES! For a moment I was really afraid to be stuck at one of the most expensive places in the world (at least it looks like) after a ride of 700km in the freezing cold and no place to go…. I quickly put my stuff in the apartment and then go out to find some food. It’s a really crazy place, people here are very rich, very styled and all look like from the cover of a fashion magazine. And in between me! Dressed like a Nepali…. Food is pretty expensive in the most places but somewhere between the famous Casino curve and the tunnel where Ayrton Senna died I meet a rich Indian guy and ask him in hindi for a place to get food. He smiles and shows me the way to a fast food place – not what I wanted but it’s one of the cheaper ones here which does definitely not mean “cheap” by western standards! I recognize that all the people I asked for the way were extremely friendly even though I rather look like from the cover of the rolling stone…. I really appreciate this. I like Monte Carlo – it’s this crazy glitter and glamour world, nothing seems to be real but everybody very important, and very nice! 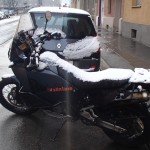 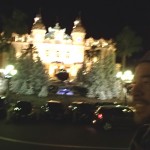 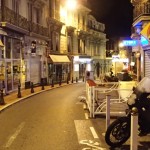