I stand up very early after not so much sleep to go to the neighbor camp to ask the rally guys for some engine oil. When I arrive there most of them are still sleeping but for the first time this year I see monkeys for more than a second on the street. On the street it was “the red ones” and here it is the second species here: the “black ones” (have to look up the real names) which are pretty similar to the ones in Pushkar but way smaller.

Suddenly the boys who took me to the camp are surrounding me again one of them telling me they have a letter for me. I think I know what this is about but he is cute and in the letter they ask for a donation for a new football. That is really cute but still I am not sure if they maybe do this with everybody coming along – this is a tourist place again! I want to help them bt to be sure this is real I ask them to arrange a boat trip to the hippos for a reasonable price. They agree and half an hour later they are back offering a boat trip for 30 euros. Well in the meantime I met Robert, a bird watcher from UK who is living here in winter time and a friend of his arranged a trip for less than 10 euros each.

Little later he shows me a colony of bee eaters which is probably the most amazing thing I have yet seen on this journey. And  its less than 500m from my camp so I will go back there in the days to come to take better pictures. When I come back to the camp I get a really nice room directly at the river for 16 euro including dinner and breakfast. I move my stuff there, fall over on the bed and sleep. At four o clock in the afternoon Robert wakes me up as we have an appointment to take the ferry to the city (Georgetown) on the Island. To the other side there is a bridge but where I am there is neither road nor power connection – only boat, ferry and generator for 3 or 4 hours in the evening.

Georgetown is a small village with not much more than the slave house and a few shops and restaurant along the road. It takes me ages to look for internet (even here, no power before 6 pm) and at the end I have no success. I see a beautiful old tree close to the road totally littered and cant help to take a huge plastic bag Allah put there just for me and clean the place. In the tree there is a cave so if clean it would even be possible to sleep in there but for sure enjoy the heat of the day. People are staring at me but its ok – better they think I lost my mind than they think I am an ATM.

When coming back to the camp people there already heard of what I’ve done. Suddenly its no problem to get internet even here as one of the drivers just connects his cellphone to my computer. For dinner I get amazing local food sharing it with the drivers and a couple from the Netherlands

So that was the second day in the Gambia, sometimes a little exhausting but people here are really sweet and the nature is amazing! 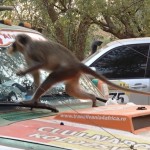 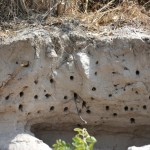 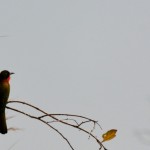 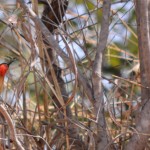 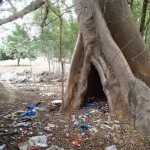 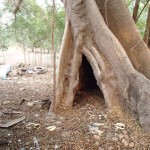 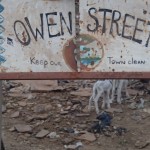