After getting an amazing breakfast next morning my new friends, the teachers of the nearby school tell me about a problem with the water supply at their school. It’s a solar powered pump and I am engineer… I take a look at it. There is no pump and the inverter is falling apart. I find out everything has been checked already by technicians, to repair it would cost 3000 Euro of which they have 1000 already. If I possibly could help them… its about the children!

I think a few hours about it and then talk to one of the teachers who speaks the best English. In fact the amount of money is not incredibly high. Higher for me alone than for their community in the village which is several hundred people. His last and best argument (remember, there is somebody volunteering here, of the problem is actually already taken care from somebody who does things like this professional) is that I am white, so I am supposed to give the money. The people here have been really nice to me so it makes me sad we have to disappoint each other so much. I don’t have 2000 Euro in my pocket to give away like this and I am not sure if this is what the people here need – another white guy who proves that all white guys just come to supply them.

In the afternoon I pack my stuff on the bike and head to the ferry crossing river Gambia just in time to cross the Senegalese border before it is being closed. When the Gambian customs officer demands 5 Euro I pretend being dumb so he sends me to the police. Passport stamp and straight forward to the other side. Within 15 minutes the border is crossed without paying no bribe at all! Great! I don’t find a money changer so I stop at a restaurant in a village about 50km after the border. I tell I am hungry but only have Euro. Little after I have finished food the boy comes back having changed 100 Euro at a much better rate than offered at the border.

The ride to Saint Louis becomes a night ride. I go with just a view more breaks around 300km after dark and arrive in Saint Louis at 2 am. Luckily I had the number from the neighbor of the Guesthouse so the people from the restaurant where I had changed money earlier had informed them about my late arrival tonight. By the way I see three small and very long foxes crossing the street in the dark!

Border crossing next morning is again very straight forward. Stupid police officer who wouldn’t hand my passport back before bribing on the way is smiling now and asking for me to play guitar. I wait until I have my passport back and tell him there is a bulk offer: 2 songs for 10 euro… I turn around and cross the river – no music this time. For Mauretanien side I prepare 50 Euro for the visa. In Nouakchott I tried to get my visa extended before which was not possible within the validity of the first visa. However I had gotten a paper from the police headquarter then to prove not to have been caught committing any crimes in Gambia ever before. Guys at the border are somehow impressed by the paper, stamp my passport for free and say Good bye! Passavant for the bike is 10 euro again and all together hardly 20 minutes after approaching Senegale border post I ride on the dam into Mauretanie hunting wild boars along the road!

The road seems to be much better this time. I have seen much worse since being here last time so I take most of it at pretty high speed having a lot of fun until more and more sand dunes are on the way. Most of the weight of the heavy loaded bike is too much in the rear. When coming on sand I start swimming immediately and the heavy bike with tyres which are slicks by now is impossible to handle.

One time in a very unexpected sanddune right next to the dam I slip and fall. Nothing happens so far but there is nobody to help me lifting up the bike – I am alone in the desert. I dropped the bike on the damn so its not full down and the sideback is helping too. I try a trick standing with my rear to the bike and lift it up! YEAH! I never thought I could do this alone!

Around 70 km after the border the piste becomes a highway and I increase the speed – at sunset I am sitting in my favourite café in Nouakchott. When dusk is about to end I am at Les Sultanes. “Welcome home!” Nicolas says and it really feels so. I eat diner with the staff at the kitchen and have real coffee and un petit peu internet. I am happy to be here! 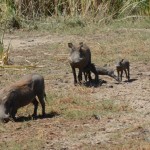