After a very nice overnight flight (Good food, great service and never ending space for my legs in the second, older plane of turkish airlines) via Istanbul I arrive in Aqaba at the red sea at 3 in the morning. After spending the last year in south east asia I am incredibly surprised by the very relaxed all time smiling border police officers in Aqaba. Formalities are a question of a few minutes and when the last officer is checking my passport if I got all the stamps he is a little surprised by the load of visas in my passport and gives it back to me smiling before he has even found the stamp I just got.

A little before 4 o clock I stand in the front of an empty airport (totally empty – obviously our flight was the only one between midnight and 6.30 in the morning) thinking about what I will do the next two hours until the car rental opens. Suddenly a car comes around the corner and a guy jumps out asking if I am I. He tells me he had thought already that I will come on this plane and didn’t want me to wait for two more hours. Actually I ordered the car for 6 because I didn’t want him to stand up in the middle of the night only to give me the car….

Seems like I have to get used to Muslim hospitality once again. Half an hour later I have the car and the guy even changed some money for me. First I drive direction Saudi Arabian border to stop only a few kilometers before the border post to take a swim at the red sea. After putting my hands in the water I decide I will have the shower later and only wash my hands here. Its not really cold but the air is an hour before sunrise. I turn around, cancel sim card, money changer and barber and go directly to Wadi Rum which is less than an hour drive. The car rental guy told me it will not be possible to get anything out there and that I should be careful with the touts at the visitor center of Wadi Rum. He wanted to sell me the Wadi Rum tour very expensive (= official price) but I want to do it myself. The desert around Aqaba is stunning and just a little before Aqaba the sun rises. In a landscape of which beauty is impossible to describe.

At the visitor center a guy stops me to make me do a tour with him. Actually I need a coffee and more important a little rest as I didn’t sleep all night. I tell him I will go to the village first to get coffee and think about his offer. He goes to the village too and so we meet again at the entrance where he (Salem) invites me to his home. He seems to be a very nice guy and of course I accept. Little later I get to know his family and then take a great nap at his home. When I arrived there was no wind to fly at all so I drive a circle around the tiny village after waking up. Its only 10.30 and there are already dust devils in the desert – and its incredibly hot in the sun.

A little later Salem is back and we start our desert trip in his Nissan Pick up. The place here is of such an incredible beauty that pictures cant do it any justice. I believe my mouth is open all day and once again I have troubles holding back my tears of happiness when sitting next to Salem. He tries hard to find a place for me to fly but just as I unpack my wing on an amazing dune the wind gets stronger. An invisible dust devil takes my wing and fills it a little with sand before I put it together again. We have tea beneath a rock where we meet a friend of my guide. While I put together my wing trying to get out the sand he shoots a bird – the shot echoes I think more than a minute and two minutes later there are more friends of them coming just when we leave.

I already start thinking it was a mistake to take the paraglider with me. It’s the absolute perfect paradise here for rock climbing. Neverending rocks between boulders and up to several hundred meters high difficulty from very low up to over 10. Several shady and cool canyons making climbing enjoyable even in the heat of the day. This is honestly one of the best climbing areas I have ever seen and the most beautiful one too. And the best – its even less than an hour from the airport and the red sea. I already think about coming back – maybe just for a few days of climbing….

We visit some more amazing sights and then go to another village to get some food and the barber I was desperately asking for. The barber is amazing and when I ask him how much it costs he first says its for free for me… He did really a good job so I insist on paying being careful not to insult him. Next we get real local food: humus and falafel with kindofchapati – I love it. Having been a little careful in the morning I really start liking Salem when he drives through the desert like a rally pilot – our driving style is pretty similar and he takes me to an amazing place for sunset. Back in Wadi Rum we visit his brother Mohamed. I really enjoy the evening discussing and telling stories like old friends and even praying together. Their children are georgeous, and there tents/houses are supercosy and cool at day as well as warm in the night. I am invited to sleep at Salems place and I feel really sad that I will have to leave tomorrow morning.

I could write for hours now describing how much I fell in love with the place and the people here but I really suggest you to come here and experience this yourself. You can contact Salem any time and he will be very happy to show you the most beautiful places, climbing spots as well as best barbers and food. If you ever come here, and I hope you will, you’d better call Salem Domayan: 00962776445651 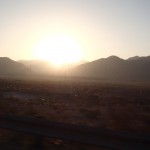 Sunrise a little before Wadi Rum 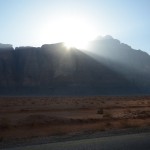 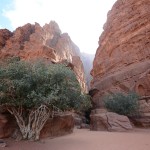 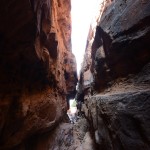 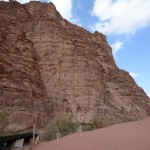 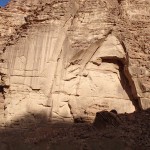 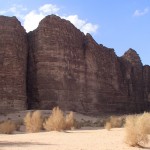 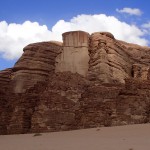 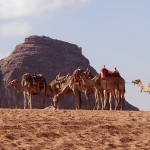 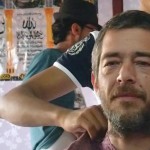 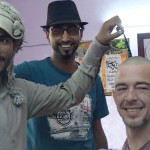 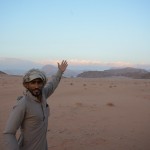 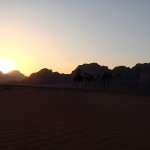 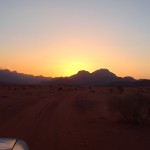 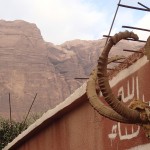 who would believe capricorn are roaming these mountains?