HARIOM! Hello my friends! I am most happy to welcome you in my travelblog again. I really had a hard time to find a way to get a visa for Pakistan but hopefully this problem is solved now. So I am very happy I can say I will probably be on the road again making daily reports at the end of January. Today I arrived in Pushkar so from now on there will be updates again. Promise.
For now let´s start with the story of my journey to Pushkar which will offer some surprise already.

I left Austria on Thursday taking emirates airlines to india having enough time on my stop in Dubai to visit the city. Leaving from the new skylink terminal was extremely confusing and even worse – I wanted to get dinner at the airport with my mother before leaving. Unfortunately all restaurants at the new international airport in the huge metropolis Vienna close at 9.00 pm. Well all but one, and this was nearly sold out. I had a nice Rindsgulasch with Semmelknödel which was to be my last proper food until arriving in Pushkar. It was amazing!

For the flight I managed to get a window seat so I was most likely to be able to sleep all flight. But then a young mother appeared to sit next to me asking me if I would change seat with her small daughter who sat at the way in the middle. No sleep so but I was sitting in the middle of three couples – two of them being fighting all night. Friday morning at half past seven I arrived pretty exhausted in Dubai. Visa? On arrival and for free!

Outside an Indian taxi driver was waiting for me to show me the city. Some bargaining later I agreed to pay much too much having in mind that the trip will take much more than the 2 hours we had agreed to. Dubai is a crazy city. It´s like completely clean – even though its full of Indian and Pakistani people! I could hardly believe! And the skyscrapers are too big even to fit on the fisheye of my camera. Even the bus stands have air condition! I had breakfast (aloo parantha) went to an (Indian) barber to get rid of the fur around my head and finally bought a t shirt in an indian shop (which in fact had been most necessary because even the single warm pullover I was dressed with was much too hot here). I made friend with the driver quickly so the trip to the city took little more than 4 hours and I had only 2 hours left to wait. Back at the airport I soon was nearly freezing in the very comfortable smoking lounge. I took out my guitar and soon after I started to sing I was surrounded by a pile of…. Indian people!

I caught my flight in the afternoon and this time made the real deal with the seat! First row window seat! JAI HO! Even the service was much better than on the first flight the stewardess who served me being a very cute girl from Serbia who is living in Dubai now. I like Dubai more and more. Like every time I come to Delhi by plane I enjoyed the moment when the smell of delhi hits the passenger room a lot. It really feels like coming home! 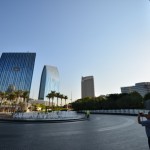 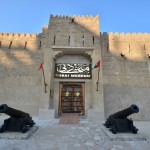