I wake up early morning and get chai. After a little argument with the hotel owner close to my car park I leave quickly. The first 50km being no problem, the engine running very smooth and full power but then the light for the charging control lights up. I stop at a big TATA workshop and the guys say they don’t have the parts but they will do their best. I wait in the car while the temperature climbs up to 38°C – outside in the shadow. They removed the battery charger and I have to wait. The manager comes round and tells me to make myself comfortable – I am his guest! I get chai, food and everything I need. After food he offers me to take a shower. Hot water? I ask … YES! I take a shower in a nice hotel room and as the repairing takes longer (no power, coming after half hour) I also use the bed and take a little nap. 4 hours later the carbon inside the battery charger is replaced and they wake me up. Everybody wants to take a picture so I forget to take one myself… Never mind, I chalo.

10 km later the engine has no more power. I stop and call the guys again. Ten minutes later 2 of the mechanics arrive and fix the charger – it was loose and as the fan belt is connected to the cooler too the engine became hot. Done within 2 minutes so I can go on. A little later I stop at a petrol station and recognize that the tubeless tyre in which we put a tube in Pushkar doesn’t look good. Some of the stitching had broken, so the next thing I need is a tyre wallah. At sunset I stop in Nagaur to see the tyre wallah shaking his head: No possible! I could do it myself so I know it is possible. He asks me for tools to take down the tyre but they had disappeared – I hadn’t found them when cleaning the car in Pushkar. However what kind of tyre wallah is this who doesn’t have tools to do his work? I jump into the car and go 200m to the next tyre workshop. Guy there says no possible and brings me back to the first guy who is suddenly ready to help… 2 hours he says – No problem I reply and go to the chaishop to order chai. Suddenly the mechanic comes back and tells me to get a new tyre. I tell him this kind of tyre is not possible in inda as I had tried everything in Pushkar to get one. He insists so we have to go to a tyre shop where he finds out this kind of tyre is not possible in india… We buy an old tyre to use as a patch and go back to the car where I get my chai finally believing they will start to work now. When I come back to the car everything is like before and he again asks me for tools! I start getting a little pissed as he suggests to go to Bikaner where they have the right size nut to take down the tyre. I jump in the car and chalo. He was right this had taken exactly two hours! But I had expected the tyre to be fixed by then! What to do I will find a place where people can help and not only want to earn commission for selling me a new tyre. (And if I had bought a tyre there he still wouldn’t have been able to change the tyre).

A little later I relax and enjoy the street. 50km before Bikaner after overtaking a few trucks the engine has a sudden loss of power again. I stop, switch off, switch on again and no problem… My guess would be either petrol filter blocked or carburetor dirty. I have a spare petrol filter with me so I call a friend at home who is mechanic. He confirms my guess so I go on and decide to change the petrol filter tomorrow – no problem. I pass Bikaner and about an hour later I reach my daily target which is 4% of the way home. Finally at a chaishop I can take out my guitar and play one or two songs for the guys who roam the place. When I start writing the blog its well past 1 o clock. No problem I got a shady place so I can sleep a little longer tomorrow. Happy that only minor problems occurred on the first day driving after suryananda was standing in the dessert for a year I fall asleep soon. 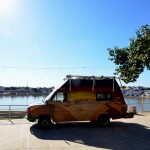 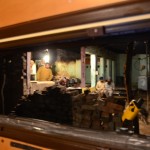