Waking up early I try to repair the tyre and find somebody who will help at the 3rd attempt. Driving through Thar dessert is amazing again. I know the street as I was here three years ago by motorbike. Suryananda is fine and the only one thing slowing us down is the street condition. By late afternoon it appears to become a boring day but then in Abohar a bus scratches along the right side of suryananda. No major damage but the painting and the back mirror are damaged. No fun to drive left with no mirror right but what to do…. At the next stop I recognize the tyre is done again. As I have twin tyres in the back I decide to remove it and continue on four wheels. It takes me quite some time to explain what I want to the tyre wallah. Again he wants to sell a non existing tyre and after removing the broken one he wants to make me go on using 5 tyres…. I take his tools and start removing the tyre that is too much on my own. What to do….

The sun sets while we do this so it will be a night ride again to the border which is little more than 200km to go. Two hours later the main road is blocked and I don’t want to take the detour as I am tight on petrol and Indian currency. I spend the night in a small village 60 km before Amritsar. As soon as I stop close to a chaishop people start surrounding suryananda knocking and trying to open the doors. They manage to open the back door which makes me jump out of the car a stick in my hand threatening to give a bamboo massage to everyone who touches the car. People step pback and I lock myself in the car. I don’t want chai anymore and go to sleep. Many mosquitos in the car make it impossible to sleep properly – what to do… Not one of the best days of my journey.

After waking up I do not bother to get a chai but get on the road immediately. I know a chai shop where I stop whenever I am in this area. The guys there remember me so I get breakfast, shower and clean the car for crossing the border. A little before the border I stop one last time to go to internet and get chai. Internet not possible as there is no network close to the border…. I enjoy chai and samosa and go on to find out Wagah border is only 4 more km to go. They made the border completely new on the Indian side so I go wrong on the first attempt. Soldiers tell me which way to go. I enter the border area and no one stops me so I continue very slowly having no idea where I can get the stamp in my carnet de passage. Only a few meters before the border line a private car overtakes and stops me. Obviously I have missed the custom area and need to go back.

They put a stamp in my passport and then start to examine my carnet the passage. In the meantime I go out with an officer to examine the car. He takes a short look and tells me to remove my luggage so they can x ray it…. To do this he gives me a small airport trolley. I open the bus and start to take out the kitchen first. The officer recognizes that it will take ages to take out all luggage and enters the car. I show him everything and he decides to take an xray of some of my clothes. I put all he wants in a few bags and on the trolley to go back to the custom building. The guys who are working at my carnet found out that the car stayed much too long in india by now. I tell them about the engine problems and that it was not possible to fix everything before my last visa was finished. At that time I had to leave the country for two months so it was not possible to get the car out of india within 6 months. They understand and start the required paperwork. No x ray is taken as the carnet seems to be more interesting. After my clothes standing around in the hall for 2 hours I take them back into the car. By then the border closed so I have to stay for the night which made one more problem: I am not allowed to spend the night inside the border area, neither can I go to Pakistan and I already left india. No possible to go back on a single entry visa… They suggest to spend the night just outside the border post so the soldiers can guard me. I am invited for two meals, chai and everything I need by the border post. (I have no more Indian currency as it is not allowed to take rupees out of india.) Late at night I ask if its possible to drive a little direction Amritsar to get internet as it would be comfortable to get some information before leaving india. No problem. Coming back 2 hours later I fall asleep quickly. 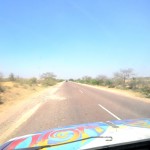 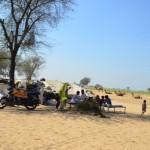 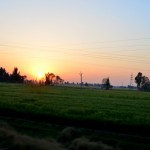 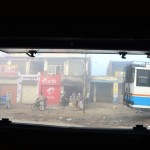 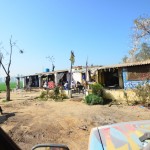 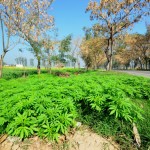 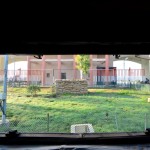