The hole in the clouds is expected exactly between Sommaroy and Tromso tonight – so I don’t need to chase, I just need to wait… And I do so drinking free coffee in the lobby all sunday morning doing internet and writing the whale blog. Chatting with a friend from Helsinki she gives me a contact to stay at in Rovaniemi just a little before I leave. I am already ready to go so I am pretty straight with Miro after he confirms my friendship request and ask him if I can sleep at his place at Tuesday. He is pretty straight too and says yes. I am a little confused because not having expected this but very curious and looking forward to meet him. In the afternoon while it is still light I drive to Tromso to get Petrol, a Pizza and some supplies for tonight.

The sun sets at 15:36. Aurora forecast predicts nothing while waiting at the Pizza shop but still I leave around 7 o clock to go to a nice viewpoint at a Fjord which I had found hours ago. The weather is nice, blue sky and pretty warm at around 0˚C. As I find out the temperature here is hardly ever less than -10 because of the gulf stream… even though I am way further north than Abisko where it had around -30 in the coldest nights I have experienced.

When I arrive the half moon is out and shining strongly. I curse it because it blinds me so much I hardly see the northern lights at first… but suddenly they become stronger…. and stronger…. and stronger forming one of the most amazing Displays I have ever seen. I have seen pictures of pink and purple Displays in the last days and strongly hope for one… but in vain. Still the mirroring effect in the Fjord is just incredible and I stay until the moon descends behind the summit of a long hill a little before 2am – still more than two hours until it will be below the horizon but the blinding effct is much less and the Display too – until the moon comes out again at the side of the hill. I leave to another place in a valley where I guess there will be less light pollution. I arrange the camera and fall asleep.

Waking up I am not really freezing, it feels a little chilly but the sky is blue – I start the engine, pack the camera (missed not too much) and hit the road. Before the sun rises at 8:18 I pass Tromso quickly heading along more amazingly beautiful Fjords and enjoying the beautiful weather. Approaching the finish border the population gets visibly less. While along the Fjords there are pretty well populated villages every now and then 50 km before the border I see the last petrol station. And then it gets cold. The border is kind of a “mountain” pass – at 500m elevation a little above tree level and situated in an amazing landscape.

Another tiny village at the finish side – mostly two hotels of which one is closed, one petrol station and a shop – no more houses and this will be the biggest town for the next 200km. The landscape is empty – just the road, the sun, the nature and me. A little before sunset I suddenly notice a huge elk to the right side of the road. Krkrkrkr – the same noise like always when I hit the brakes and then I slowly roll out – hardly any grip here I go back and there they are standing in front of the setting sun! An incredible view of these crazy animals. I quickly take some pictures and then just enjoy the view. They really seem to enjoy the sun and it looks exactly as funny as in the Disney movies I have seen as a child when these huge animals start to jump around in the deep snow and go crazy for the sun! When the sun sets at 15:35 (norwegian time) I arrive at the next petrol station and ask for a place to spend the night – the rooms at the petrol station are full and the hotel behind either – next hotel 60km but no guarantee for a room.

The forecast says the cloud hole will be here tonight and not 60km east… The Aurora forecast is pretty bad for tonight so I decide to get a Reindeer steak and wait a little at the restaurant of the petrol station. Outside its around -25˚C again and the sky is clear. I am used to trust the clear sky more than the Aurora forecast and the decision to spend the night outside again was made before ordering the food already anyway. The Restaurant closes at 10 – I head back towards northwest around 7. After 10 minutes driving I recognize some clouds at the horizon in the direction I am heading to – but not a glimpse of an Aurora! I stop and watch the situation for a few minutes, the clouds are slowly moving towards me so I turn around heading where I need to go anyway – southeast, away from the clouds and the Aurora.

A little before passing the petrol station I recognize a very weak greenish spot in the sky – just for a second. I accelerate, quickly pass the light pollution and stop maybe 5km after the village. Is an amazing place, a flat and beautiful ice desert. I have always loved deserts: Jordan, Sahara, Balochistan, Thar, and many more. The similarities are astonishing, the clear skies, tiny population, life threatening but amazingly beautiful nature – the loneliness and the dependency on and responsibility for yourself. Here you can die within minutes and nobody will be near enough to help you in any way. I love this place! I stop at a small parking lot in between walls of snow next to the street having an incredible overview of the flats to the north and the moon being in the south – not being supposed to set before 4:30am – at 5:30 dawn is starting. 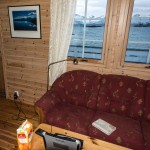 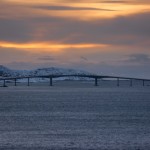 looking back to the bridge to Sommaroy 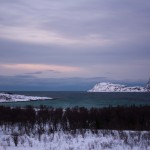 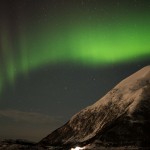 first Aurora of the night 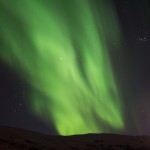 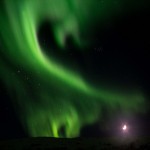 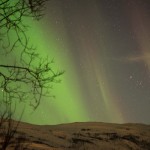 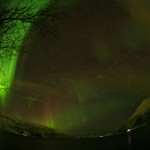 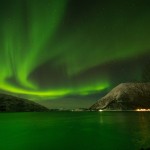 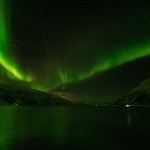 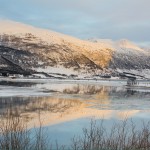 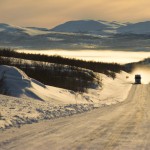 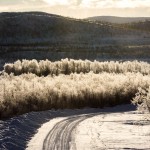 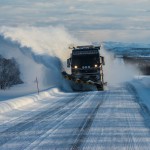 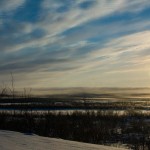 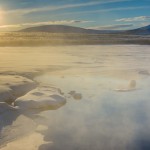 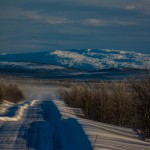 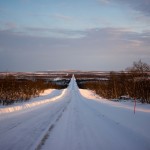 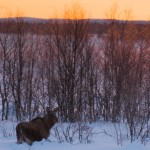 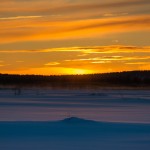