And what can I say, even though I am pretty far south already I witness an amazing display in purple again! I watch for maybe half an hour and then I hurry to meet Miro who is an amazing guy. We have a coffee and food at his place and when we go out to smoke a cigarette the Aurora is still dancing – even in the light polluted city of Rovaniemi! We jump into the car and leave the town. Miro has not seen it that often yet to so we enjoy a lot until late night. I have to drive to Helsinki tomorrow so it should not be too late for me either!

Sun rises at 8:20, I leave later than planned at 10. Little after Rovaniemi most of the snow disappears from the road and at 64˚N I see the first liquid water in rivers. Sun sets at 17:17 a few hundred km north of Helsinki.

I get a cheap ticket for the ferry 24 hours later and spend an unexciting day resting at friends in Helsinki. Has been exhausting 850km yesterday with partly very bad road conditions (that area where it is not cold enough to freeze permanently but melts and then freezes over again). Today the sun rises at 7:53 and sets at 17:17 – already a plus of 2:30 daylight since I left Sommaroy!

In Estonia I visit another very nice friend. Its an amazing country with lots of wild jungle, flat like a pancake and swampy frozen at the moment. I stay another day and try to get an offer to fix the car – but its not worth the afford. Sun rises at 6:30 and sets at 18:39 – more than ten hours in between for the first time. When I leave snow is falling and turns all white again – no sun (still rising at 6:27). Estonia is snowy, Latvia is extremely beautiful, a cheaper finland with forests lakes and incredible beaches and Lithuania is an agricultural desert. Sun sets in Poland at 16:47. I drive most of the night and take a nap around 150km before the border to Czech Republic. When the sun rises at 6:45 I am still asleep, but when it sets at 17:25 I sit at my mothers place, drink coffee and book the next flight. Only 13:25 until sunrise! 16:42 a few days ago! 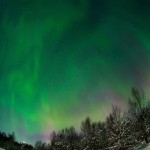 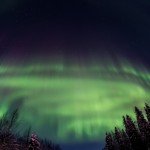 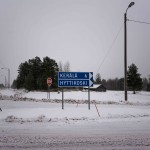 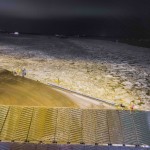 the ferry from Helsinki casts off 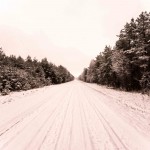 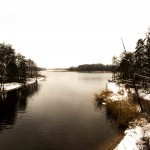 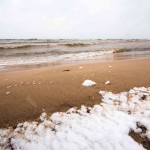