We leave Sukkur in time and as soon as we are on the Highway we make way. The landscape is incredibly….. boring! (Well at least this is new to me). At lunchtime I get very tired. I feel like sleeping for about an hour but then it gets better. It feels like I have been driving home a long way at night and these are the last 10 minutes of driving. Well at least its only 800 to be done to the border and I hope as soon as we are in Punjab I can drive alone. We cross the border an my bodyguards give me hand sign to drive on. YEAH! 20 more km, I think and then I stop for a chai! (When being escorted this is not easy to do) Suddenly I hear a horn and see the police car again. They stop me and I have to go back with them – it was a misunderstanding and I will get an escort until we are at the border. What to do. In the afternoon we stop in a small village for chai and little food. As soon as we stand we are surrounded by more than 50 people who look at us curious. I am not allowed to leave the car and my bodyguards bring food and chai to me. It feels really strange being guarded all the time. Even on the motorway the have the blue flashlight turned on all the time and the other traffic has to give way for us. When the sun sets I count little more than 400km but I feel fresh so I go on.

Two hours later I get hungry and ask the escort if it is possible to get some food. Several times I tell them I want no hotel, local food and things like this but when we stop after half an hour (after passing many small roadside restaurants) we stop in front of a restaurant with a lot of big cars in front (No, no trucks and no caravans too – more the mercedes and bmw kind of). I want to be polite so I take a look at least but inside there are people in western clothes sitting on chairs at tables eating with knife and fork…. Escort waits outside so I go back to tell them this not possible and to illustrate what I want I sit down on the floor and pretend to eat from the floor. Faster than I can react the take me under my shoulders, lift me up and smile at me. The oldest officer takes me at the hand and we go to a place right next to the first one – this time the escort comes in with me. I get amazing Chana Masala with rice and chapati. Probably the best food on this trip yet. When I want to pay for food and chai they say no. The owner of the restaurant invites me for eating like them and trying to talk in urdu…. What to say – the feelings I have are hard to be described by words – I am more than happy for this gesture of friendship that is offered to me. Pakistan people are really same like Persians in their hospitality – It seems like never ending.
About 160km before Lahore the guards are changing again. 5 Minutes later we stop and they say hello and ask me if I need something, where I want to go and what they can do for me. Wow this is the first time something like this happens until now I had more the feeling like they want to keep me moving…
I tell them a chai would be great and sleeping, well I feel pretty awake now but I don’t want to make them drive all night so I tell them if they want to sleep we can go to the next police station and make it their choice. We go on to stop again 5 minutes later at a chai shop. We talk a little and they tell me they have decided I should sleep at their police station. I accept and 5 minutes later we are there. I am told to put suryananda behind the door directly into the entrance – we can´t drive in the yard because the second door is too low. We block all the vehicles inside but no problem…. I have a nice talk with all the guys from the police station, clean suryananda properly for the border and fall asleep very late surrounded by police :). 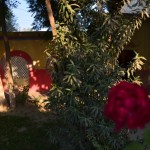 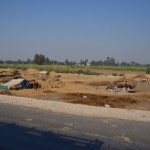 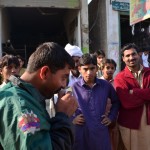 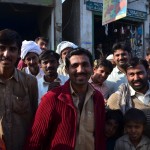 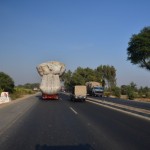 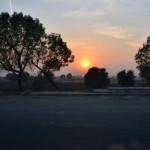 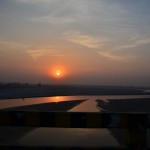 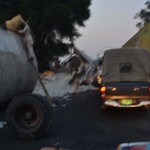