When I get up I have chai and sing a few songs first. No hurry the Levies here are nice guys and I expect that not to get better on the other side of the border. I go to the shop, with escort of course, to spend my last few rupees and after cross the border. Pakistani side I only need the stamp in the passport which I get in a minute so I continue to the Iranian side. They direct me to the front of the office building, take carnet and passport and tell me to wait. Less than an hour later the guy who took the papers comes back with an army guy and tells me the army guy is my escort – that’s it! They don’t even ask for Alcohol or whatever illegal stuff somebody could bring from Pakistan…. I get 20l, at 1000 Toman per liter expensive petrol (1euro is 4260 Toman) and on we go to Zahedan which is 55km away. On the way there we stop once to change the escort. I wait approximately an hour and then two guys come to sit next to me until Zahedan.

They direct me into town and I have to stop at a roundabout where I already had been waiting for a long time when I was here last time. Again I wait more than an hour until a police car comes to take me to the next roundabout where I am supposed to wait again. They still have passport and carnet so what to do? I lock the car and take a walk through the city. The police man tries to tell me I am not allowed to go anywhere without escort and I tell him I don’t want to sit in the heat in the car for anpther hour to wait to be taken to the next roundabout… My walk makes him work a little faster so the next police car comes within a little less than an hour to take me… to the next roundabout. Again my papers change hands, again some of it is copied by hand. After that I tell the guy to give me my papers and he is confused enough for a moment to do it. I straightly go back to the car and tell the guy I will leave in 5 minutes. After exactly five minutes the next police car comes to take me…. You guessed it right but this time I don’t stop.

My navigation system tells me the way and I go direction Highway to Bam. Police follows me and asks me to stop on the highway as the escort will be here in 5 minutes. Again I tell him I will wait for exactly five minutes and again the escort comes exactly after five minutes. They ask me to hand out my passport but I refuse to do so as I know I will not see it again until I am in Bam and they will let me wait as they like. We shout at each other for a moment and then he threatens to take me to the police station because I refuse to prove my ID. What to do…. I give him the passport. He goes to his car and wants to start but I don’t go to mine. When he comes back I tell him I will not go nowhere if the passport is not in my car. He sends a (very) young guy with a kalaschnikow to sit next to me and take care of my passport and the Taliban. I feel sorry for the guy and need petrol soon so I accept the solution but make up my mind about my tactics on the 400km to come before the escort will end in Bam.

The idea to keep my passport in my car by taking a soldier with me works out. In the confidence of having control because having my passport the third guy who sits next to me starts to give me orders. The first one or two I obey but then start to ignore him. At the next guard change he tells me to stop. I tell him to give me my passport passing the police station not reducing speed at all. Again he tells me to stop. I get more slowly and tell him to give him my passport and while he starts searching in his pockets I stop the car around 500m passed the police station in the desert. When I stop he stops searching and tells me to turn. Again I accelerate and hit the road. I tell him he can either jump out of the driving car with my passport, give me my passport and we go back or stay in the car until the petrol is finished which will be the case in about 450km. He chooses the second one and we go back. I hand out my passport again getting the promise to get it back before leaving but the officer hands it to the next soldier.

I feel sorry for him already now so I give him a chance and tell him to hand out my passport which he refuses. I go back to the car very fast and the engine is running before he is there. When he has one foot inside the car I go and before he is sitting properly on his seat he finds us on the wrong side of the street with a bus coming towards us pretty fast. I see his wide eyes and tell him again to give me my passport. He refuses for less than a minute and then I have my passport back. Sorry to the bus driver and the two truck drivers but I indicated on which side I will go so it should not have been too much of a problem for them…

Late at night we arrive in Bam, the escort at my side in another car and the passport in my pocket. I get some food at a restaurant while police is waiting outside. I ask them what they are waiting for and they call somebody who speaks English. He is telling me that the escort is finished and they just want to make sure I don’t sleep in front of the restaurant because this is directly at the Highway and dangerous…. I tell him I will relax a little and leave after half an hour. You make me wait I make you wait I think, and I really need to relax after all day driving. Around 11 p.m. I leave with the police guiding me to the next roundabout showing me the way to Kerman, where I told them I want to go. I hit the road! Finally free! (I believe).

A few chai shops later I reduce speed thinking about having another chai to celebrate freedom after more than 1000km stupid guards around me avoiding me having any contact with the local people. In that moment a plain white car shows up next to me with two guys waving their arms like crazy. Ok, we are in Balochistan, it is in the middle of the night somewhere in the desert…. I don’t stop asking myself if these guys are drunk idiots (not very probable in Iran) or fucking police. I go 50km an hour with them only meters behind me for a few kilometers. Then I make a pretty sharp brake and go on driving 30. Soon they turn up next to me and tell me they are police and I should move on. Damn! No freedom, I think and think about a tactics to get rid of them. I continue going not faster than 50 annoying them a lot. After the next guard change we go steep up a mountain. The police car has changed to an official one which is easy to spot in the mirror for the red flash light. On the steep road I reduce speed to 30, after 20 minutes the red lights disappear around 130km before Kerman. I keep on going and after 20 minutes I see the flashlight again but disappearing then. So they just checked if I don’t park on the roadside as soon as they are gone and then went home to sleep.

We are at an elevation of 2400m by now and it is too cold here to sleep anyway. Soon a side road to the Kaluts appears. An amazing desert recommended by friends and travel guides. I take the side road but being very tired already I think about finding a place where to sleep. After the escort I get a little paranoid and think about the place a long time. I’d like a place not to much hidden and not too much jumping in every ones eye. I am lucky to find a petrol station in a the small town of Gobalf at 1700m above sea level. Directly at the main road with a dark corner for me. I fall asleep at 3.30 a.m. only minutes after turning of the engine.

Only 2 pictures today, sorry I was not in the mood to take too many…. 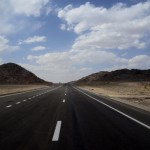 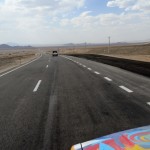