I wake up early and make a shanti morning skipping every bus to Gokarna ten minutes before leaving. Anyway I have little diarrhea – maybe because of switching to the water from the well to quickly after drinking the second chai it gets better so I don’t think about it any further. At 13.00 I finally make it to the bus stop and meet some cute girls from Austria there.

In Gokarna the mechanic changed the spark plug and Omtatsat is better again. Still there is some problem with the spark system so I go back after internet café. A part needs to be replaced but no possible getting it in Gokarna. Mechanic makes a few adjustments and fells me I will make it to the next bigger city (more than 300km). I go back to Belekan beach and when I arrive there the engine stops again. We call the mechanic but while Prakash is still on the phone find out its only the petrol which is low. I switch to reserve and no more problem.

Some pretty old hippies are drinking chai and chatting with Prassat (not Prakash). When he says that all people from Romania are stealing I have fight with him. From that moment he doesn’t talk with me anymore. Sorry, I really have to control myself better, it´s just I am sensitive for sayings like this after the journey I made to here already. Even when I am writing here in the evening he is telling bullshit about Iranians with some Israelis. I feel sad for him being so afraid – of snakes, of cats, of 2012, of foreigners… What to do but to ignore him?

After this fight I go down to the beach to make a long yoga session until it is completely dark. I meet an Indian guy there who is happy to take some pictures – so am I. In the evening Dir comes round again. He is living at Paradise beach with the freaks but he has clear eyes and seems to be nice.He is from Haryana and he says he wants to go back with me to Europe by car. We will see… Olga and Dennis from Ukraine have arrived in the afternoon and they want to do yoga lesson tomorrow morning. I want to leave direction to Kerala tomorrow. Jog Falls – second highest waterfalls in the world are my next target and the journey there can be done within the afternoon I believe. I heard Amma is at her Ashram presently to so I want to go directly there after jog falls and enfield mechanic in Cochin… Anyway the blog entries are getting shorter which is a sign to leave for me. I enjoy Prakashs company too much and I easily could get stuck here but I want to meet Amma. 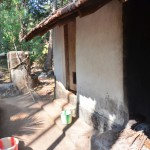 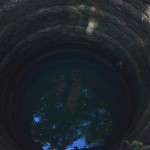 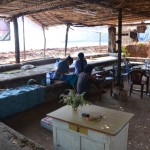 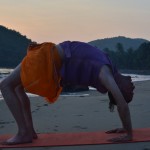 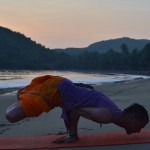 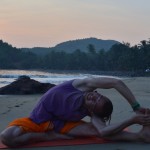 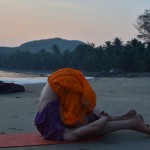 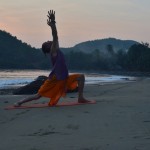 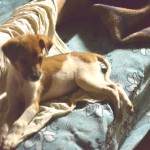